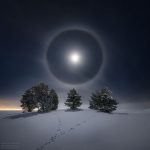 Scientists refer to these rings of light as 22-degree halos because the radius of the ring is approximately 22 degrees. They form around either the Moon or the Sun when high, thin cirrus clouds coast approximately 20,000 feet overhead. The millions of tiny ice crystals within the cirrus clouds create these ethereal halos through processes of both refraction-the dividing of light as it travels through the crystals- and reflection as the light changes its original direction and bounces off of the crystals. Lunar halos such as this one captured by Göran Strand typically indicate an impending storm.