Astronomy textbooks may have to be written again to include nine planets as Planet Nine emerges to be a near truth.

Through mathematical modeling and computer simulations, researchers at Caltech believe a ninth planet orbits 20 times further away from the sun than Neptune, allowing for an orbital period of 10,000 to 20,000 years. It’s about ten times more massive than Earth, yet smaller than Neptune, with a highly elliptical orbit.  All of these statements are purely mathematical in nature; no direct observations have been made of the planet.  However, its existence may hold the answers to many questions about the distant Kuiper Belt, the field of icy objects and debris beyond Neptune’s orbit.

The puzzle began when astronomers noted that thirteen of the most distant objects in the Kuiper Belt have extremely elliptical orbits, pointing about 30 degrees downward in the same direction relative to the plane of the eight known planets. According the Caltech, “The probability of that happening is about 0.007 percent.” At least without external influence.  Cue the new planet theory. 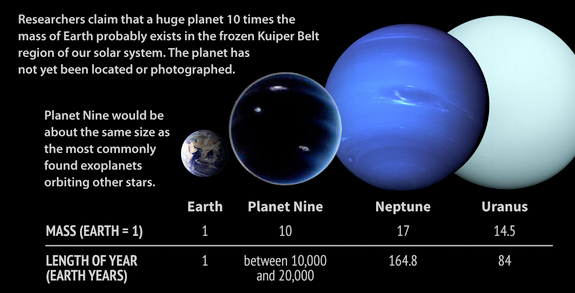 Many other thoroughly tested theories failed within the constraints of our known solar system. All but one.

“Then, effectively by accident, Batygin and Brown noticed that if they ran their simulations with a massive planet in an anti-aligned orbit—an orbit in which the planet’s closest approach to the sun, or perihelion, is 180 degrees across from the perihelion of all the other objects and known planets—the distant Kuiper Belt objects in the simulation assumed the alignment that is actually observed.” – Caltech

The two head researchers’, Mike Brown and Konstantin Batygin, next steps are to provide observational proof of Planet Nine’s existence, a feat they strongly encourage the involvement of the public.  This may prove more challenging than expected depending on where the planet is on its orbit.  If at perihelion, Planet Nine will be much easier to detect.  But at its furthest point, astronomers need super-powered telescopes like the twin 10-meter telescopes at the W. M. Keck Observatory and the Subaru Telescope, all on Mauna Kea in Hawaii, to find the planet.

Hopefully Planet Nine does exist. More pressing is the need to rename it. Comment your name ideas below!