Since the 1920s, astronomers have struggled to deal with the very thing that keeps humanity alive: the atmosphere.  Although it provides a relatively stable and hospitable climate on Earth, it also makes studying the cosmos from Earth challenging.  The atmosphere absorbs ultraviolet light, x-rays, and gamma rays, an important attribute to sustaining life by preventing lethal doses of atmospheric radiation. However, we have learned these wavelengths of light also provide critical information about the chemical composition of the universe, among other things. The atmosphere also traps air pockets and distorts objects like stars from the ground views, giving them the appearance of twinkling. Earth-based telescopes can correct these obstacles to a certain extent, but they can not collect the data that a telescope positioned outside the Earth’s atmosphere could.

German Rocket Scientist Herman Oberth first proposes the creation of a space telescope in his book “Die Rakete zu den Planeträumen” (Rocket to Interplanetary Space). Unfortunately, his idea could not be supported by known technology during the time.

American Lyman Spitzer followed up Herman Oberth’s proposal. He would go on to spend the next 50 years of his life pursuing the creation of a space telescope that would revolutionize existing methods of astronomical imaging.

NASA approves the Large Space Telescope project. Later, the LST project would be renamed after Edwin Hubble, the astronomer who, in the 1920s, discovered the universe was expanding.

After Spitzer’s 30 years of lobbying, NASA and the European Space Agency (the ESA partnered with NASA on the Hubble in 1975) began to receive funding from Congress to build the first space telescope. The work to develop this massive project was divided among many institutions and corporations.  The Marshall Space Flight Center would design and construct the telescope and its support systems. The Goddard Space Flight Center would create the telescope’s science instruments and handle ground control once the telescope was launched. NASA contracted the Perkin-Elmer Corporation to assemble the mirrors and Fine Guidance Sensors. Lockheed Missiles (now Lockheed Martin) built the structure and tested it.

The Hubble Space Telescope is completed and scheduled to launch October 1986.

Space Shuttle Challenger exploded only one minute into its flight on January 28th.  After this tragedy, shuttle flights for the next two years were postponed, including the one which would bring Hubble into space.

Nearly 70 years after the Herman Oberth first published his idea, the Hubble Space Telescope launched aboard the Space Shuttle Discovery on April 24th, 1990. When the highly anticipated first images were received back on Earth, there was clearly a problem. Instead of the groundbreaking crystal clear quality expected, the images were blurry. Scientists and engineers identified that Hubble’s primary mirror suffered from a tiny yet detrimental flaw.  The mirror was just 1/50 of an inch too flat, enough to cause the light to reflect towards the wrong area.  Within a month of discovering the problem, NASA and the ESA developed a corrective optics package that would restore Hubble’s clarity. The difficultly was not in discovering and finding a solution to the problem, it was how to fix it. All the repairs would need to be completed in space. 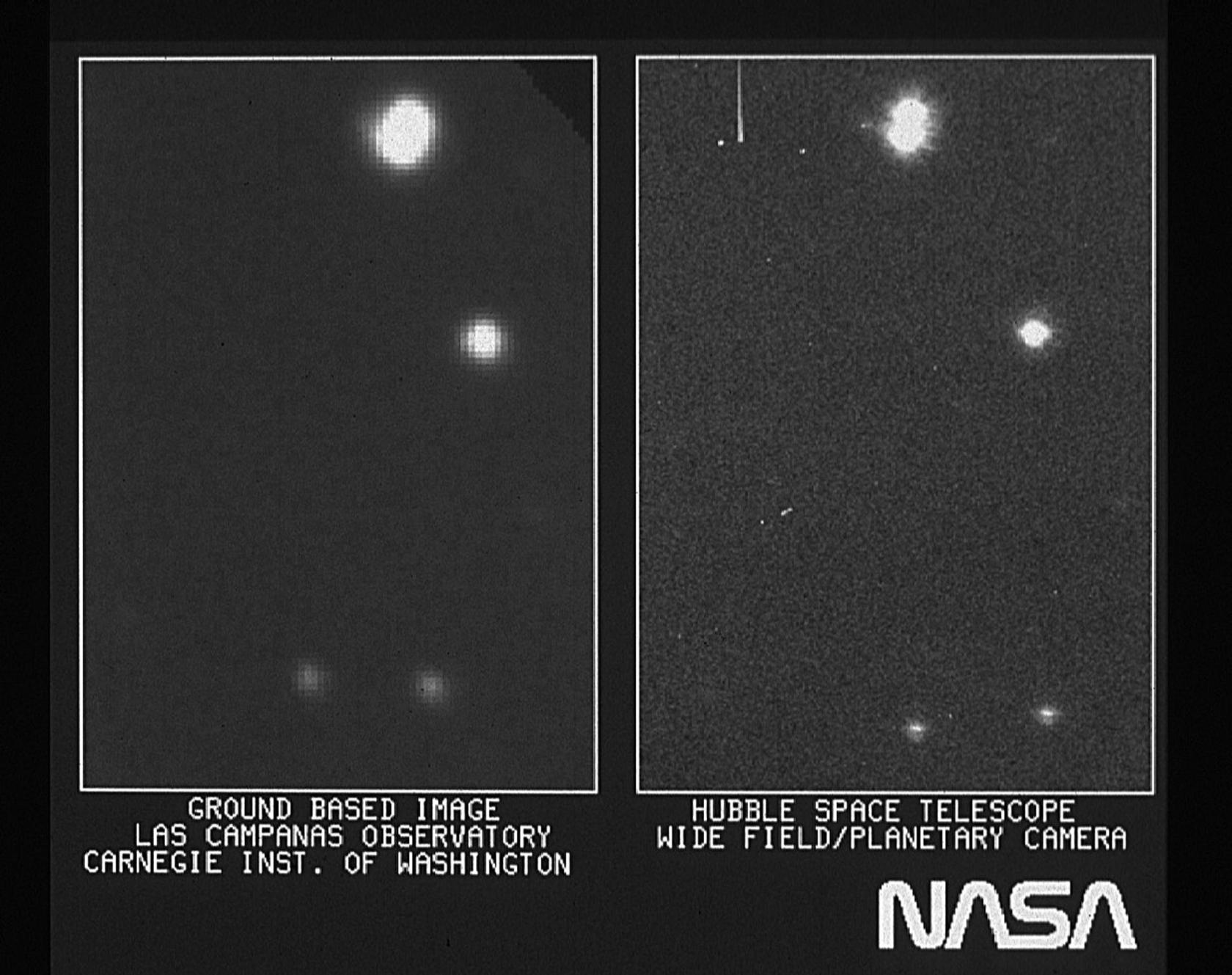 Hubble’s first ever photo on the right is quite different from what the quality it delivers today.  Due to early engineering issues when the telescope first launched in 1990, its image quality was only slightly clearer than Earth-based telescopes. The image on the left of the exact same area in space was taken from Las Campanas Observatory in Chile. Image credit and copyright: Image: E. Persson (Las Campanas Observatory, Chile)/Observatories of the Carnegie Institution of Washington; Hubble Image: NASA, ESA, and STScI

In December, astronauts successfully installed the corrective system to the primary mirror during the first Hubble Servicing Mission (SM1). The era of Hubble imaging officially began. Four trips to Hubble over the course of three more service missions (the third was divided into SM3A and SM3B) would follow in the years to come.

The fourth and final Hubble service mission (SM4) is completed.  A new main camera was installed, along with repairs the Advanced Camera for Surveys and the Space Telescope Imaging Spectrograph. A ring like structure was also attached to aid in the de-orbit of the telescope when it stops functioning. It had been thought that Hubble could be placed in a museum after terminating its mission. However with the unfortunate cancellation of the US Space Shuttle Program in 2011, this became impossible.

The repairs made to Hubble during SM4 were only expected to extend its lifespan at least until 2013.  Thankfully, we are still receiving crystal clear images from our first ever space telescope. In two years, the then 28 year-old Hubble will retire and be replaced by NASA’s James Webb Space Telescope, which is expected to be at least 100 times more powerful than its predecessor. Its missions are to reveal the earliest stages of the universe after the Big Bang and to understand the evolution and formation of stars, galaxies, and ultimately the origins of life. The James Webb Telescope is projected to launch from French Guiana in late 2018.

The Hubble Space Telescope allowed us to peer billions of years into our universe’s history and further understand our small yet immensely important place in the cosmos.

Click here to explore more of Hubble’s amazing images it has captured over the past two decades.