Today marks the ten year anniversary of the Mars rover mission. On January 3rd, 2014 (PST), Mars rover, Spirit, landed on our neighboring planet and functioned until 2010. Much of Spirit’s mission was done with one of its six wheels malfunctioning, which is why it is quite impressive the rover lasted for six years. Spirit aided in the discovery that Mars used to be a hot, volcanic environment with water, much different than its bare, rocky surface with no water that we now see today!

Luckily, Spirit’s companion rover, Opportunity, landed on the opposite side of Mars just three-weeks later and is STILL functioning today, carrying on the legacy of Spirit.

The discovery that water was present on Mars could suggest that life was possible thereat some point in time. If Mars had a lot of water, this could also suggest an atmosphere surrounded the planet as well because without one, the solar wind would have blasted away any water that formed.

I could write an essay about the history of Mars, BUT I’ll save that for another time! If you have any questions comment below!

This is one of the most recent images Opportunity has taken of the surface of Mars. 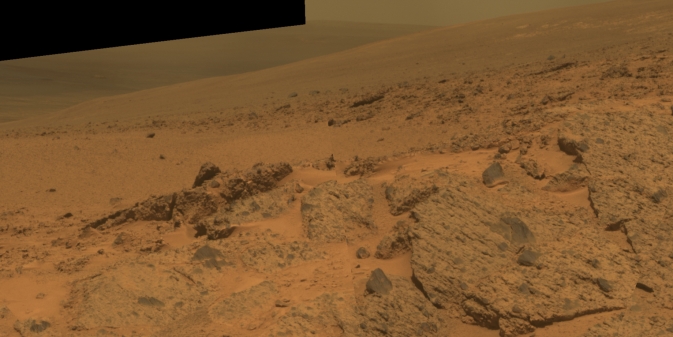