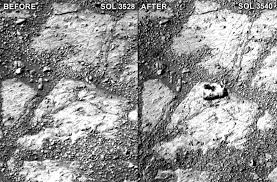 On January 8th, the Mars rover Opportunity spotted a mysterious rock seemingly appeared and on the surface of Mars that wasn’t in the same exact stop four days earlier. Many thought that we had finally had proof of the thought-to-be science fiction Marian species. Well, sadly, the mysterious rock has been de-bunked.

Apparently, it was the actual rover itself that moved the rock. Researchers at NASA made this claim after examining previous photos showing this same occurrence had happened previously on a nearby hill which the rover had passed through.

I am glad we finally have the answer to this head-scratching mystery of the month!

Remember, comment your thoughts below! Do you think it was really the rover or some other force at work?