One of the fastest spinning pulsars was discovered by ESA’s INTEGRAL satellite in 2012. Now, we have a beautiful image created by NASA’s Chandra X-Ray Observatory and was released February 18th, 2014.  A pulsar is a spinning neutron star and aren’t unusually, but this one has some unique characteristics which separate it from the others.

Firstly, it is spinning at a rate from 2.5 to 5 million mph, which is one of the fastest recorded speeds for a pulsar. Secondly, it has a huge tail that stretches nearly 37 light years long. This means the pulsar, also known as IGR J1104-6103, has the largest tail discovered in the Milky Way. Quite a remarkable neutron star!

Below is the newly compiled image of the neutron star fro Chandra, its tail, and the nearby supernova remnant from which IGR J1104-6103 was born from. High energy particles from the pulsar have also created a structure known as a pulsar wind nebula. 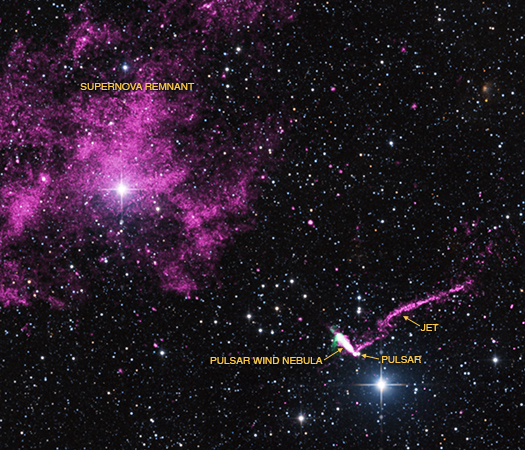