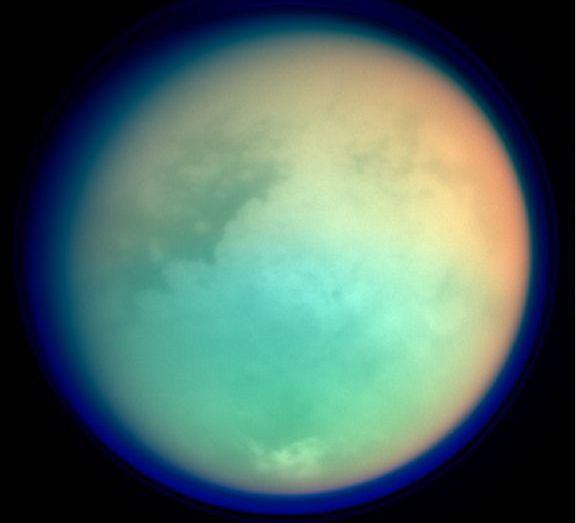 Today, NASA’s Cassini spacecraft is to fly just 2,274 miles above the surface of Saturn’s moon, Titan.  The goal of this encounter is to further grasp the elemental nature of the moon’s varying surface temperatures.  Cassini acts as a messenger of data in this project. The spacecraft will send down radio signals to the moon’s surface, and then transmit them to NASA’s Deep Space Network back on earth. The teams at NASA must later undergo a complex process to sort through the radio signals in order to gather the needed data. This flyby is the 103rd done by the Cassini spacecraft around Titan.

Titan is a moon with an atmosphere composed of mostly nitrogen (95%) and methane (5%). What makes Titan so intriguing is the fact that it’s the only moon in our solar system with an atmosphere. Extreme cold temperatures of near -290 degrees causes methane (which is a gas on earth) to cool down to a liquid on Titan.  As a result, the moon is covered in lakes of liquid methane!

Who knows…maybe there are extremophiles in the depths of those lakes!

PS: My sincerest apologies for not posting in over a month (!). I promise to not let this happen again. Thank you all so much. 🙂