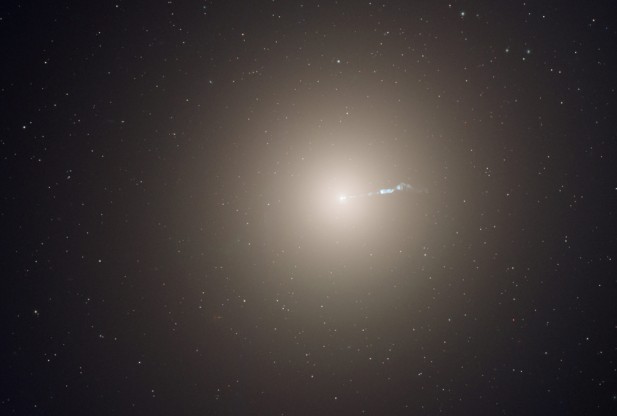 It is not unusual for stars to be flung out of their home galaxy to wonder deep space.  However, an entire globular cluster being shot out of a galaxy has never been observed until now.

Researchers at Harvard-Smithsonian Center for Astrophysics in Cambridge, Massachusetts discovered globular cluster HVGC-1 from the M87 galaxy traveling at speeds beyond those of the surrounding clusters.  There is no logical explanation for this strange occurrence.  Theories speculate the globular cluster is being ejected because of the potential presence of two supermassive black holes at the galaxy’s core.  If HVGC-1 approached too close the center, the black holes could propel the cluster with enough force, sending it outside the galaxy.  The end destination for the escaping globular cluster during the next few million years is lonely deep space, without a galaxy to call home

Globular clusters are groups of  old stars compacted into a single group. Each cluster holds an average amount of 100,000 stars. Within the Milky Way, there are 150 known globular clusters, but M87 is estimated to hold thousands of these celestial objects.

Comment any questions or thoughts below and enjoy the weekend!