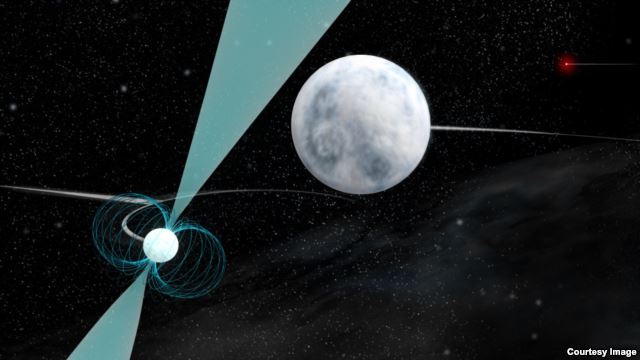 I know, there is a lot of confusing statements in that sentence!

Let me break it down piece-by-piece.

First, a triple star system is when three stars have a type of  unique, orbital connection to one another. In this case, the star at the center of this system is a pulsar closely orbited by a white dwarf, and both of the stars are orbited by another, smaller white dwarf at a further distance.

A pulsar is the remnants of a star which has died through a violent, cosmic explosion known as a supernova. A pulser is formed when the remains of the supernova collapse into a neutron star. These special stars get their name by sending out pulses of light into the sky. The pulsar in the triple star system is unique because of how quickly it pulses.

I know, much of this can be confusing. Soon I will be writing a follow-up article further explaining the destruction of stars and what becomes of them.

Now, I’ll let you digest that mouthful of information as I still am! Don’t worry if many of these large ideas are confusing to you as they’re currently confusing scientists too! That is why this is such a great discovery.

Hope my explanations cleared up any confusion and if you are still scratching your head, I encourage you to do further research on this puzzling topic.